Veteran American saxophone and flute player Charles Lloyd (b. 1938) and legendary drummer Billy Higgins (1936-2001) have been friends since the 1950s. They have recorded together several landmark sessions for the ECM label, notably The Water is Wide (2000) and Hyperion with Higgins (2001). In January 2001, at the saxophone player’s invitation, both musicians met at Charles Lloyd’s house for what would turn out to be their last session together since Billy Higgins passed away four months later.

Luckily, most of the impromptu solos and duets on various instruments (drums, acoustic guitar, African and Indian percussions, Sintir, tenor and alto saxophones, flutes, piano or Tibetan oboe) were videotaped by Charles Lloyd’s wife Dorothy Darr and edited into a full length documentary called Home. The clip below is an excerpt from that documentary.

Home is one of these rare documentaries capturing the creative free-flowing exchange between two outstanding musicians without the external pressure of having to perform for an audience. Watching and listening to such an expressive musical conversation is simply mesmerising.

Higgins, it was universally agreed amongst musicians, made everybody sound better. There was a quality in his playing that focussed a soloist’s thought, and helped give shape to expression. During the recording of Which Way Is East Charles Lloyd told Billy Higgins “There’s a feeling when you play that I can’t describe – but there is no feeling like it in the world.” ECM 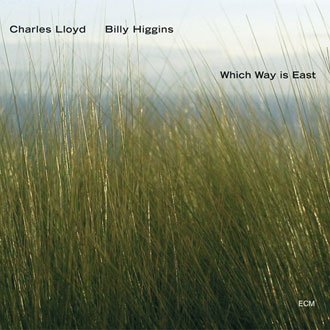 The music produced during the week-long session was also recorded and compiled by Charles Lloyd into the double CD Which Way is East, released in 2004.

Spellbinding Music is a blog which curates contemporary, modern classical, roots, jazz and folk music…and everything in between. … END_OF_DOCUMENT_TOKEN_TO_BE_REPLACED