Since teaming up in the mid-1970s, drummer Sly Dunbar and bass player Robbie Shakespeare have established themselves as the legendary dub and reggae rhythm section Sly & Robbie. Redefining the genre many times over, they have collaborated with thousands of artists and featured on or produced countless recordings, collaborations and remixes with the entire Jamaican reggae scene of course, but also ventured way beyond their comfort zone. High profile collaborations over the years have included productions with Bob Dylan, Gilberto Gil, Sinéad O’Connor, The Rolling Stones, Carlos Santana or Serge Gainsbourg among many others.

Almost a veteran on the Nordic electro jazz scene at this stage, Nils Petter Molvær is a trumpet player who thrives on radical collaborations with a wide range of musicians from backgrounds as diverse as classic jazz, rock, hip-hop and techno music. Another disciple of Jon Hassell, his sound draws heavily on electronics, effects and sampling as exemplified in his groundbreaking solo albums for ECM like Khmer (1997) and Solid Ether (2000), or more recently Switch (2014) and Buoyancy (2016), both for the Okeh label. Back in 2002, it is interesting to note that American guitarist Bill Laswell produced a dub remix of Nils Petter Molvær’s tracks “Merciful/Ligotage” for the Recoloured album.

Fellow countryman, guitarist and electronic musician Eivind Aarset is an artist who has frequently collaborated with Nils Petter Molvær. He took part in the “Khmer” and “Solid Ether” sessions, and sections of Nordub are indeed reminiscent of that era. With his electric guitar and arsenal of effects, the musician is an expert at adding ambient colour and texture in a live settings, continuing the tradition of all the great jazz improvisers.

Vladislav Delay is one of the many monikers used by Finnish electronic artist Sasu Ripatti who acts here as a gelling agent between the soloists by providing additional percussion and live dub.

Concerts at the Ideal Palace 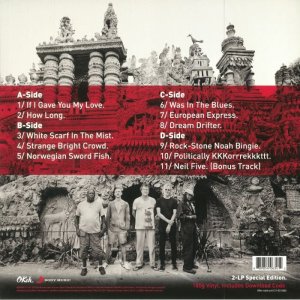 The photograph at the back of the LP cover shows the band posing in front of an unusual monument evocative of the Khmer temples found in Thailand. The picture was however taken in Hauterives in Southwestern France, a small rural town internationally known as the location of Ferdinand Cheval’s “Palais Idéal” (the Ideal Palace). The palace was patiently built over a period of 33 years between 1879 and 1912 by the local postman who used to gather stones during his daily mail rounds. A mashup of many diverse architectural styles, the monument is now a cultural landmark and the venue for The Ideal Palace summer concerts since the mid-2000s.

Aware of the mutual admiration between the musicians, Sly & Robbie and Nils Petter Molvær initially met through producer Mark Van Den Bergh who organised the initial sessions. Following a week-long residency, the Nordub project premiered at the Ideal Palace festival on 1st July 2015 which then became the most fitting launch pad for several European tours.

A 2015 live set recorded at the Barbican in London sees the musicians trade tunes from their respective repertoires – Nils Petter Molvær’s “Ligotage” followed by Sly Dunbar’s classic “Hot You’re Hot” for instance – and rework them as a dub/electro jazz ensemble. But the repertoire evolved over time during the European tours and the LP consists of an entirely new set of original compositions.

Every single track is built around a trademark Sly & Robbie riddim. Yet, the compositions never feature the offbeat guitar or piano rhythm of traditional reggae. Instead, the groove becomes the blank canvas for electronic layers and jazz improvisation. The fact that the credits are shared by all musicians on every track more than likely indicates that all pieces were composed during session or studio jams. All tracks are instrumental, bar two vocal numbers (“How Long” and “Was In the Blues”).

Expertly produced by Jan Bang with additional samples and programming, Nordub is both a fascinating improvisational endeavour and a thrilling musical partnership.

Spellbinding Music is a blog which curates contemporary, modern classical, roots, electronic, jazz and folk music…and everything in between since 2012. ... END_OF_DOCUMENT_TOKEN_TO_BE_REPLACED

This website uses cookies to improve your experience while you navigate through the website. Out of these, the cookies that are categorized as necessary are stored on your browser as they are essential for the working of basic functionalities of the website. We also use third-party cookies that help us analyze and understand how you use this website. These cookies will be stored in your browser only with your consent. You also have the option to opt-out of these cookies. But opting out of some of these cookies may affect your browsing experience.
Necessary Always Enabled
Necessary cookies are absolutely essential for the website to function properly. This category only includes cookies that ensures basic functionalities and security features of the website. These cookies do not store any personal information.
Non-necessary
Any cookies that may not be particularly necessary for the website to function and is used specifically to collect user personal data via analytics, ads, other embedded contents are termed as non-necessary cookies. It is mandatory to procure user consent prior to running these cookies on your website.
SAVE & ACCEPT
%d bloggers like this: